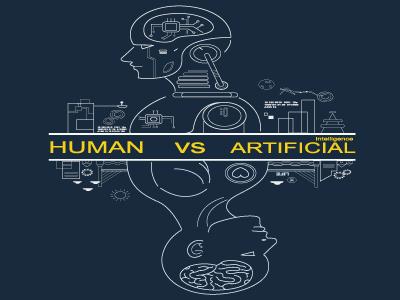 15 Dec Is Your Brain to Blame for Poor Investment Returns? Investment Psychology of Underperforming Investors

As the global financial markets became more and more complex professional traders turned towards technology to assist them in the decision-making process and manage investing psychology. Algorithms were developed to help traders make sense of the v ast amount of information available , to increase the efficiency of their portfolios and even to substitute the human element entirely.

Today, Algorithmic trading accounts for nearly 90 percent of the market. High-frequency trading tools are designed to buy and sell financial instruments in fractions of a second. Artificial intelligence (AI) based models are able to look for the best trade hours, days, weeks or even months into the future.

The benefits of using algorithms in trading are many. Algorithms can automate investment portfolios helping traders to reduce fees, increase efficiency and streamline the investment process through a simple computerized interface. They can construct and maintain a systematic process, so as to offer investment returns more protection from ‘bad behavior’ than ever before.

Above all, algorithmic trading can minimize the need for human decision makers. As human judgment can often lag behind reality, algorithms provide us with the tools to correct the errors and biases and help us make better decisions. Decisions not based on our dispositions and customs such as habit, tradition or superstition, but based on data. 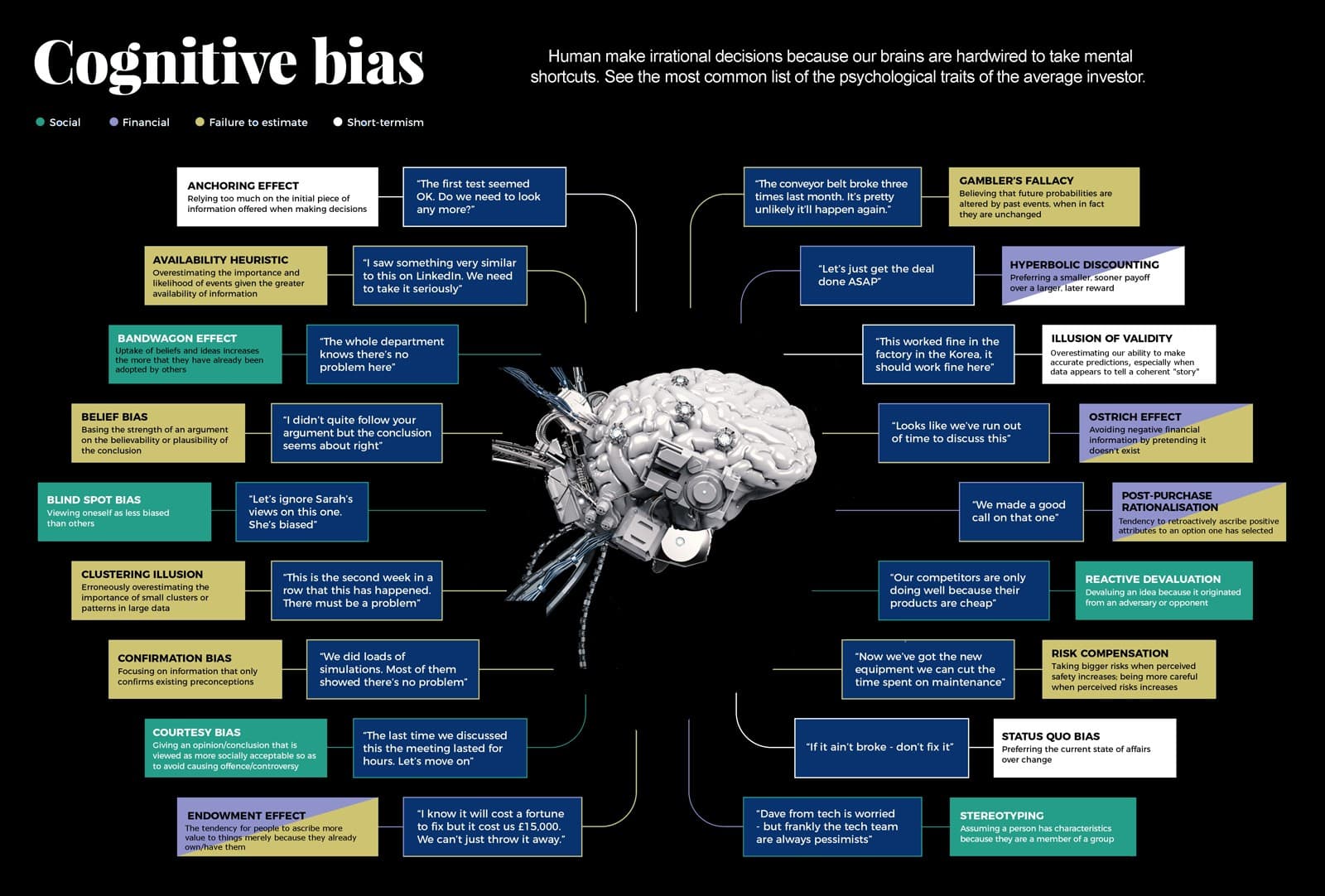 The Nobel Laureate, Economist Daniel Kahneman, in his paper ‘Maps of bounded rationality: a perspective on intuitive judgment’ demonstrated that people frequently fail to fully analyze situations and behave illogically when they must make complex judgments in uncertain situations. When applied to behavioral finance, his work, points to the fact that human decision processes are susceptible to heuristic decision making processes, cognitive biases and emotions. Here are the ten most frequent biases investor fall into when making trading decisions.

For many investors, the market’s deranged up and downs cycles which feel like the guys pushing the market are just moving like headless chickens. These erratic sharp short-term market movements create such anxiety which often leads to harmful financial decisions.

Emotions will still be the dominant factor for the average investor, instead of staying invested for the long run, they tend to buy high and sell low. Investors never want to miss a big surge in the market (thereby buying at an all-time highs), but one of the biggest blunders investors make is to panic during bear markets and hit the eject button.

The image below represents the typical emotional investing cycle: 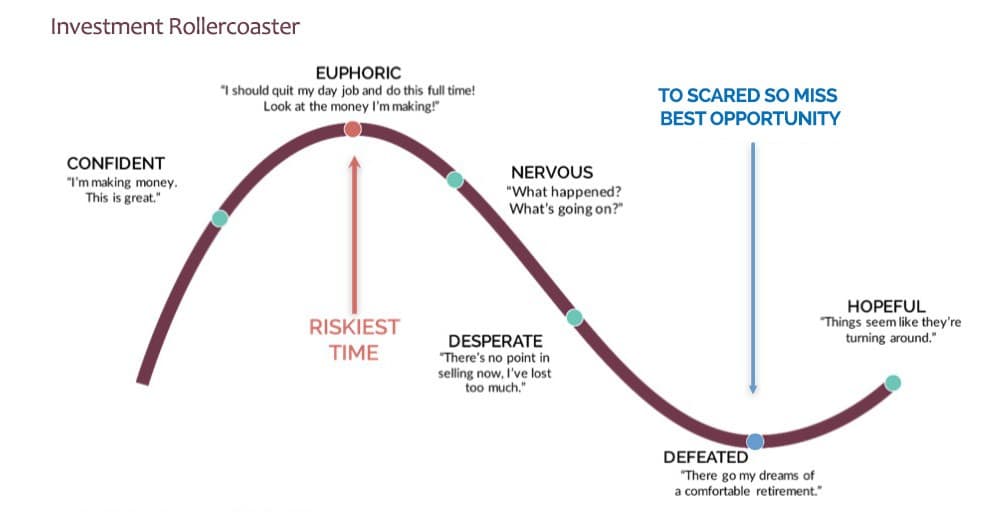 Psychology has found that humans tend to have unwarranted confidence in their decision making and an inflated view of their own abilities. Overconfidence has two components: overrating the quality of our information, and overrating our ability to act on that information at the right time for maximum gain. Studies show that overconfident traders trade more frequently and fail to diversify their portfolio appropriately.

Investor’s overconfidence can affect the volume of trading. Researchers have found that overconfident traders trade more often than rational traders. This excessive trading or as it is commonly called “active trading” can have adverse effects on the overall returns. Many studies have shown that on average households that trade frequently, generate annual returns that are up to seven percentage points lower than households that trade less frequently. This is because overconfident, overly active investors trade even when the expected returns are lower than their trading costs.

The theory holds that we place too much on the initial piece of information we discover – the “anchor”. Our bias is in interpreting subsequent information around that anchor. Investors, tend to “ overanchor” initial assessments, without reassessing the initial information and without giving new information sufficient attention. Decisions can be also ‘anchored’ by the way information is presented. In the financial sphere, values such as market index levels can act as anchors. Round numbers such as 5,000 points on the FTSE 100 Index, seem to attract disproportionate interest, despite them being numbers like any other.

“Frame dependence” holds that investors’ risk tolerances change with the overall direction of the market. Therefore, investors are overly cautious in a falling market and too confident when things are going well. This helps explain markets’ tendencies to overshoot and runs completely against true contrarianism.

Availability bias concerns investors’ tendency to focus too much on information that is often mentioned and readily available without giving sufficient weight to other factors which may be less readily available/more hidden, or which just aren’t deemed as newsworthy or important.

Some evidence suggests that recently observed or experienced events strongly influence decisions. To give a financial example, investors are more likely to be fearful of a stock market crash when one has occurred in the recent past.

The notion of ‘representativeness bias’ reflects the case where decisions are made based on a situation’s superficial characteristics rather than a detailed evaluation of the reality. A typical financial example is for investors to assume that shares in a high-profile, well-managed company will automatically be a good investment. This idea sounds reasonable, but ignores the possibility that the share price already reflects the quality of the company and thus future return prospects may be moderate.

As humans, we try to avoid the feeling of regret as much as possible. Often we will go to great lengths, sometimes illogical lengths, to avoid having to own the feeling of regret. By not selling the position and locking in a loss, a trader does not have to deal with regret. Failing to take action is also mentioned as inertia. Uncertainty and confusion about how to proceed lies at the heart of inertia. For example, if an investor is considering making a change to their portfolio, but lacks certainty about the merits of taking action, he/she may decide to choose the most convenient path – wait and see.

There are thousands of stocks to choose from, but the individual investor has neither the time nor the desire to research each. Humans are constrained by what economist and psychologist Herbert Simon called, “bounded rationality.” This theory states that a human will make decisions based on the limited knowledge they can accumulate. Instead of making the most efficient decision, they will make the most satisfactory decision. Because of these limitations, investors tend to consider only stocks that come to their attention through websites, financial media, friends and family, or other sources outside their own research.

This is arguably the strongest trading bias. Humans have an extraordinary talent for detecting patterns and when they find them, they believe in their validity. When they find a pattern, they act on it, but often that pattern is already priced in. Even if a pattern is found, the market is far more random than most traders care to admit. The University of California study found that investors who weighted their decisions on past performance were often the poorest performing when compared to others. 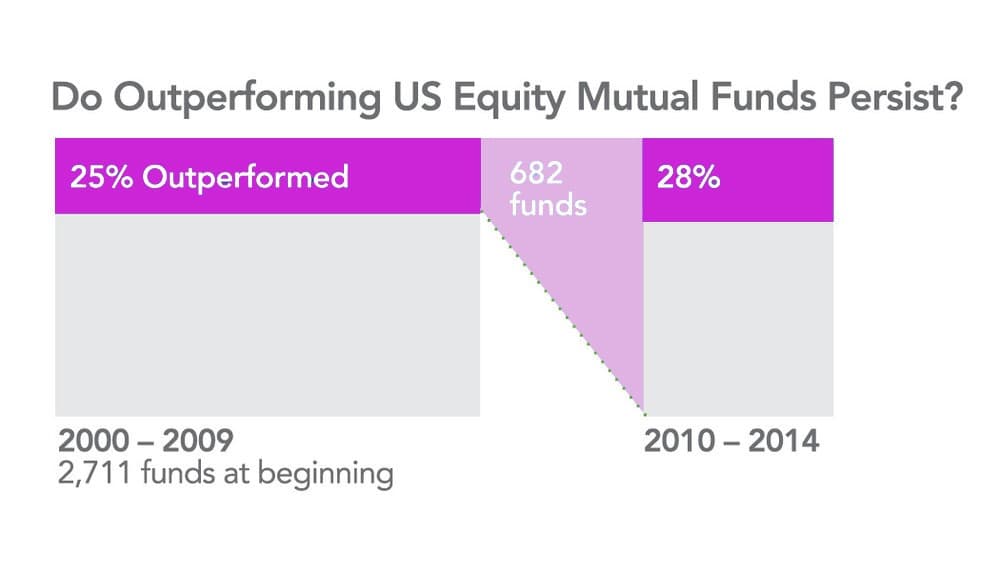 Behavioural finance suggests investors are more sensitive to loss than to risk and return. Some estimates suggest people weigh losses twice as heavy as potential gains. The idea of loss aversion also includes the finding that people try to avoid locking in a loss. The idea of a loss is so painful that people tend to delay recognizing it. More generally, investors with losing positions show a strong desire to get back to break even.

With so many flaws in our decision-making process and the explosion of available information, no wonder why algorithmic trading is bringing great advantages to the investors that use it. 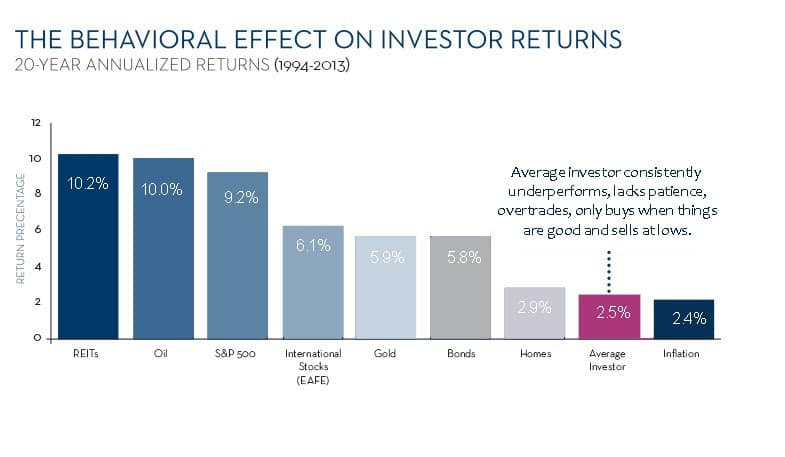 Algorithmic trading eliminates human emotions that prevent investors’ in holding losses for a longer time and selling profitable securities too early. It also tests trade ideas on historical data to eliminate poor trading ideas and retain the good ones.

High-frequency traders, sometimes called flash traders, buy and sell thousands of shares every second, executing deals so quickly, and on such a massive scale that they can win a fortune if the price of a stock fluctuates by even a few cents. Other algorithms are slower but more sophisticated, analyzing earning statements, stock performance, and news feeds to find attractive investments that others may have missed. The result is a system that is more efficient, faster, and smarter than any human.

Algorithms, like most human traders, tend to follow a fairly simple set of rules. However, they also respond instantly to ever-shifting market conditions, taking into account thousands or millions of data points every second. And each trade produces new data points, creating a kind of conversation in which machines respond rapidly to one another’s actions. At its best, this system represents an efficient and intelligent capital allocation machine, a market ruled by precision and mathematics rather than emotion and fallible judgment.

Algorithmic trading is the response to a complex global financial system

Algorithms tend to see the market from a machine’s point of view. Rather than focus on the behaviour of individual stocks. For instance, many prop-trading algorithms look at the market as a vast weather system, with trends and movements that can be predicted and capitalized upon. These patterns may not be visible to humans, but computers, with their ability to analyze massive amounts of data at lightning speed, can sense them. 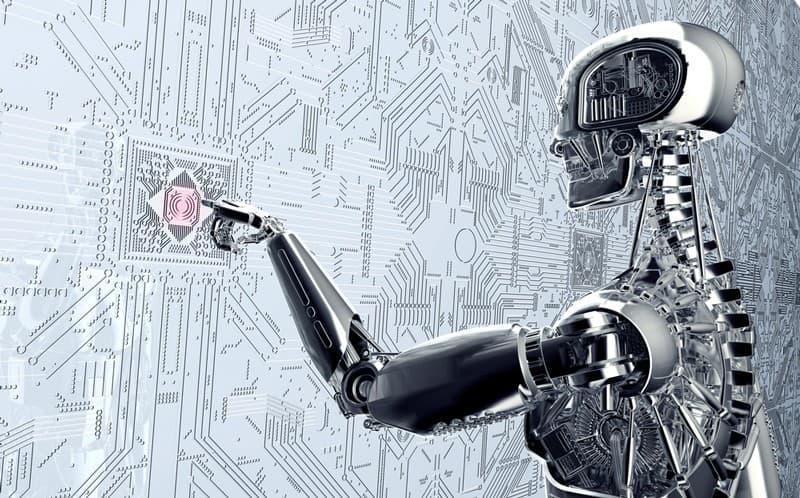 A look into the future

In the future, we will witness high-level automation of the financial market that differs from what we see today. Algorithms will become more complex as algorithmic trading will be able to adjust to different patterns using AI. Machine learning will shape algorithms which will be able to pick the techniques by themselves. Moreover, they will be set to handle real-time interpretation and integration of data from many different sources. All while avoiding the flaws of human decision-making processes.

Right now, large sums are being invested in automation intelligence and machine learning including algo-trading platforms. As an overall market, algorithms are here to stay; especially if you look globally, there is an increasing use of algorithms across the European equity markets.

Sorry, the comment form is closed at this time.